Judaism is one of the first monotheistic and one of the oldest religions of mankind. It arose from the Jewish people about 3000 thousand years ago. Judaists are people born being Jews or accepted Judaism. To date, there are 13.5 million Jews in the world, which is about 0.2% of the total humanity.

One of the main canonical books in Judaism is the Tanah (Old Testament Bible), of which the Torah (the Great Pentateuch of Moses) is an integral part. The Book of Mishnah is a commentary on the Torah written by Jewish theologians, in the 3rd century AD. Later, the Gemara was written - comments on the Mishnah. The Mishnah and the Gemara together constituted the Talmud. The Talmud and the Torah regulate all aspects of the life of the Jew, including civil and criminal law. Reading the Talmud is considered to be a very important occupation, allowed only to Jews.

The first information about the penetration of Judaism into the territory of Belarus dates back to the 9th-13th centuries. In 1388, Grand Prince Vitovt issued the first in the history of Belarus grafted to the Brest Jews, who legally regulated the life of this people in the territory of the Grand Duchy of Lithuania. The Jews were guaranteed personal inviolability and freedom of worship, it was allowed to acquire property. Persecution of Jews was forbidden. According to many provisions of the privilege, the Jews were equated with the gentry.

Vitovt's laws on the Jewish question were the most tolerant and progressive of all legal documents of Europe. Since the living conditions, the fullness of rights and freedoms in the Grand Duchy of Lithuania were better and wider, the number of the Jewish population has steadily increased over time. By the end of the XVIII century 70-90% of the population of Belarusian cities and towns were Jews. This is due to the fact that in 1791, the Russian Empress Catherine II issued a decree according to which Jews could live only within the boundaries of certain territories. Jews were forbidden to be engaged in agriculture, so they settled in cities and towns to be able to be engaged in trade, medical or legal practice. 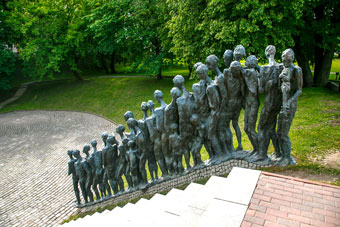 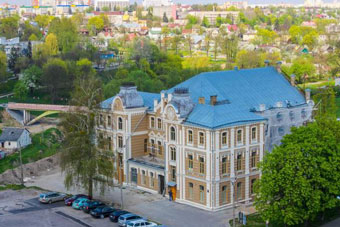 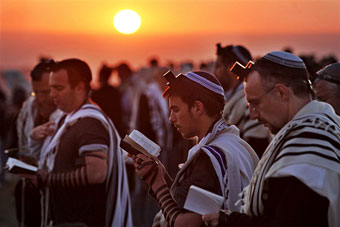 After the October Revolution of 1917, many Jews immigrated to the United States and Western Europe. Also throughout the twentieth century, the number of Jewish population in Belarus was gradually declining. After the terrible genocide of World War Two and oppression on the basis of nationality in the USSR, most Jews decided to leave the country and to settle in the newly created state of Israel in 1948.

The genocide of Jews during World War Two.

The Holocaust is a terrible tragedy in the history of the Jewish people, a genocide organized by the Nazis and their accomplices in 1933-1945. During the genocide in various ways, more than 6 million Jews were killed, half of whom lived in the territories that were part of the USSR. In Belarus, there was located one of the largest death camps "Maly Trostenets". In Minsk, the ghetto was one of the largest in Europe. Prisoners of the ghetto were about 100 thousand people, including Jews from Western Europe.

In Belarus, there are monuments and memorial complexes that perpetuate the memory of innocent dead Jews during World War Two. One of these complexes is located in Minsk, not far from the place where the Minsk ghetto was located. This is the memorial complex "Yama". In Baranovichi, on the site of another Jewish ghetto, whose victims were 12 thousand people, a memorial was also installed.

Many well-known artists, actors, scientists and politicians of Jewish nationality come from Belarus. Among them: Marc Chagall - one of the most prominent representatives of the artistic avant-garde of the twentieth century; Chaim Soutine is an artist of the Paris School; Leon Bakst is an artist and stage designer who designed the ballets of Sergei Dyagilev in Paris. The founder of the famous film company "Metro Golden Mayer" Louis Mayer was born in Belarus. Also, many Hollywood stars have Belarusian roots: Scarlett Johansson, Michael Douglas, Harrison Ford, Lisa Kudrow.

According to the 2009 census, about 13,000 people in Belarus belong to the Jewish people. Most Jews live in Minsk. Also in Minsk, there is the largest orthodox Jewish community of Belarus "Beys Isroyel". Other large communities are located in the regional cities, Bobruisk, Polotsk, Mozyr, Baranovichi and Pinsk.

In many cities of Belarus, there were synagogues, Jewish schools and libraries, etc. In Minsk, the largest Choral Synagogue was located on the present Volodarskogo street. Now, in the building of the synagogue, there is the Russian Drama Theater of M. Gorky. Today, the synagogue in Minsk is located on Kropotkina street, 22. Preserved building synagogue in Grodno. The main Grodno synagogue is one of the oldest synagogues in Europe, listed in the list of historical and cultural values of the Republic of Belarus and is an important monument of the history of the Jewish people. Services are regularly held here on the occasion of Jewish religious holidays.

In Volozhin, there was yeshiva «Em Kha-Yeshivot». Yeshiva was opened in 1803 and was the first higher spiritual school in Eastern Europe to train rabbis. The buildings of several synagogues were preserved in Bobruisk. The synagogue on Pushkina street, 110, built at the end of the 19th century and beginning of the 20th century, is in operation.

You can get acquainted with the culture and traditions of Judaism by ordering a group or individual excursion: Taki da, it's Bobruysk.

During the excursion, you will plunge into the history of one of the original and oldest cities of Belarus - Bobruisk. You will see: the Bobruisk fortress was built in the first half of the 19th century; the only active city synagogue is a monument to the end of the 18th and early 19th centuries. And you can rub the chain on the clock of the beaver monument to the symbol of Bobruisk. Citizens believe that those who touch the chain of hours or the nose of the beaver will find happiness and luck. Throughout the tour, you will be accompanied by a theatrical performance with the participation of entertainers in the images of Aunt Soni, Shura Balaganov and other colorful characters.

To enroll and order these and other excursions on religious topics, get acquainted with the culture and traditions Belarusian Judaism you can by ordering an excursion on our portal: Application for tour organization