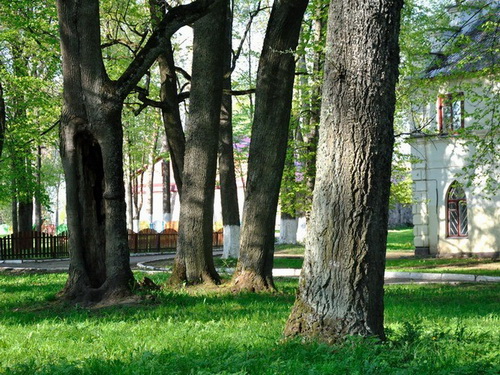 In the landscape park of the Chapskys” estate in Stankovo, 3 unusual elms grew, rooted up. They were given the names Faith, Hope and of course Love. Rare exotics of the park gave birth to legends associated with the name of Countess Elzbieta - wife of Emeric Chapsky.

The young gardener looked after the trees in the park, no one remembers his name. He was pretty, but he was lame and therefore was silent and sullen, unsociable. He talked to trees more often than people. Once, when he was cleaning the shore of the lake opposite the skeleton, where there was a gazebo, he noticed a young princess sitting there with a book. They looked at each other — eyes to eye — and from that moment on the heart of the young gardener did not know peace. And the countess did not even think that the long look she had thrown in the direction of this strong man produced stormy changes in his and her fate. The class gap between them did not allow the lover to even think about anything but the secret adoration of his mistress. And then he decided to tell about his love in the language of trees accessible to him. On the lawn in front of the palace, the gardener, with the permission of the count, built an amazing “round dance” of the three trees that were to embody Faith, Hope, and Love. The tree of Love turned out to be especially unusual: it seemed to take off, stretched up to the sky... with roots covered with leaves.

The delighted countess, glancing at the gardener, understood everything and embraced by a sudden outburst of feelings, with gratitude for the expensive and delicate gift kissed him. The count was furious. For his audacity, the gardener was awaited severe punishment, perhaps even death. The countess saved him by freeing him from a dungeon. The time passed, neither the countess nor the gardener has survived, but the miracle trees for many years surprised and delighted visitors to Stankovskiy Park.