Excursions to the national park Pripyatsky:

Accommodation facilities in the territory of National park Pripyatsky:

National park Pripyatsky - a unique natural biodiversity of the region in the South of Belarus, which has preserved its typical and unique on the European scale natural bio-complexes and habitats of rare animals. This youngest national park in Belarus is of great importance not only within the country and on a global scale. It has the international status of a key ornithological territory (IBA international program) as well as a Key Botanical territory. National park is a unique ecological corridor connecting Central and Southern Europe. The floodplain of Pripyat – the largest migration channel of migratory birds in Europe.

Geographically, national park Pripyatsky is located within the Belarusian Polessie, in the area between rivers Pripyat, Stvigi and Ubort. Administratively, the park is located on the territory of the Zhitkovichi, Lelchitsy and Petrikov districts of Gomel region with an administrative center in the agro-town of Lyaskovichi.
Pripyatsky national park impresses with its vast and virtually untouched expanses of wetlands - 188 thousand hectares, of which about 35% is an absolutely protected area. This region is called the «Belarusian Amazon», because it is here that the vast swamp massifs, wide floodplains of Pripyat river and its tributaries, oak forests and deciduous forests are located.

The history of national park Pripyatsky began in 20-30 years of the twentieth century, when Polish academician V. Shafer proposed to create a protected area in Polesie, taking as a basis the largest in Europe Olmansky marsh massif. Subsequent studies of the unique nature of Polesie for several decades gave an excellent scientific basis for the creation of a protected area. On June 3, 1969 by the Resolution of the Council of Ministers of BSSR №200 of June 3.06.1969 «on organization of Pripyat state landscape-hydrological reserve» was organized as a part of the Ministry of forestry. In 1996 Pripyat state landscape-hydrological reserve was reorganized into the national Park «Pripyatsky».

National park Pripyatsky located in the valley of Pripyat river in the center of the Polesie lowland. After the retreat of the glacier Pripyat Polesie was a huge water basin filled with melt glacial waters, which later became known as «Pripyat sea», and in the middle ages numerous swamps Polesie were designated as «Herodotus sea». Gradually, as the reservoir shallows, in its place formed extensive peat bogs, some of which have survived to the present day. 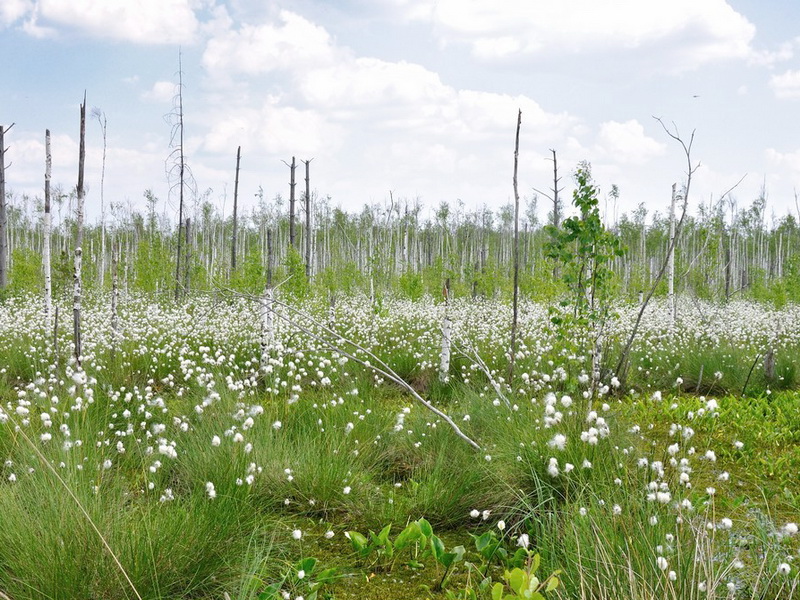 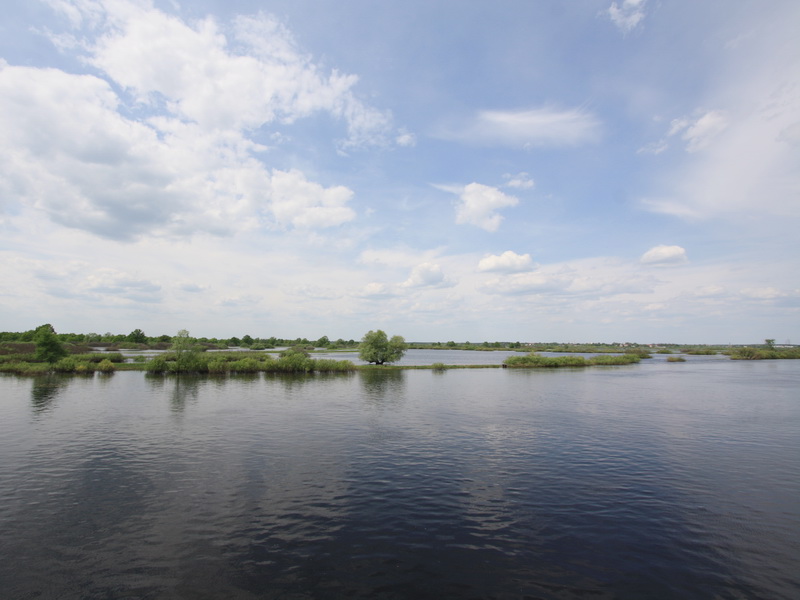 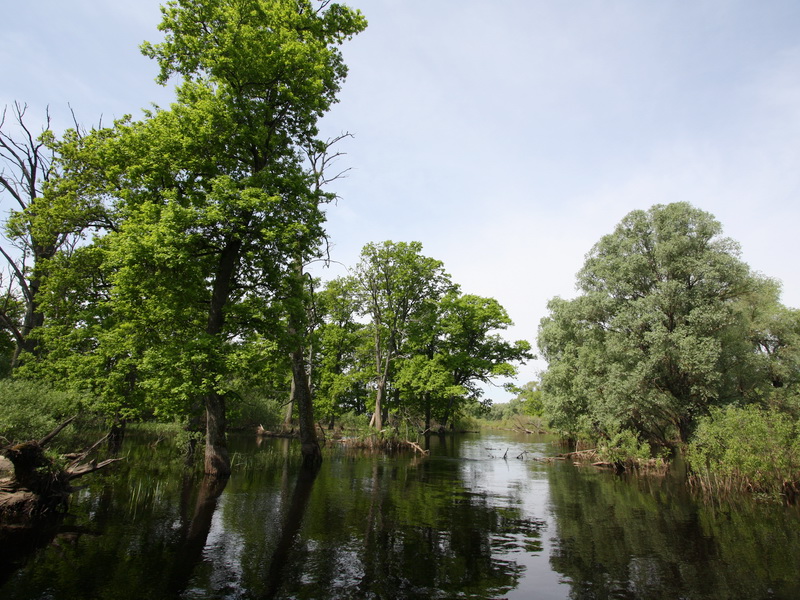 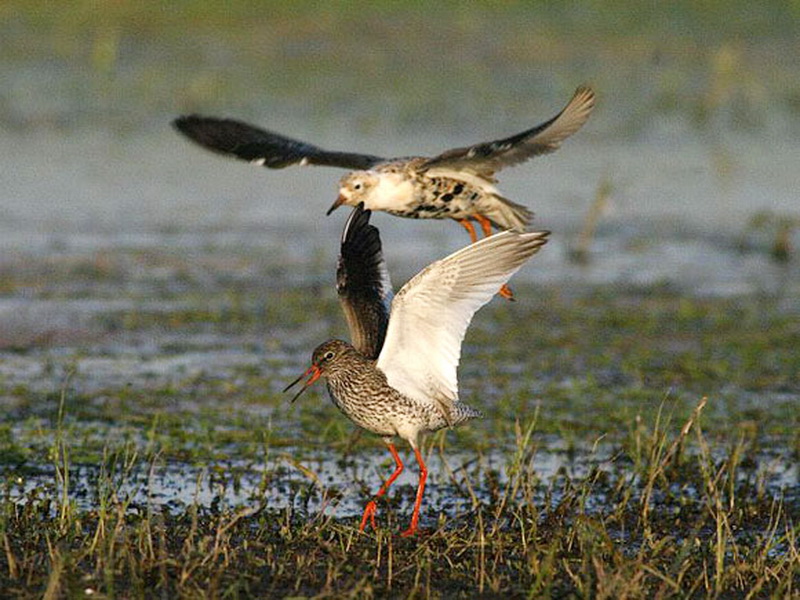 National park Pripyatsky it is a dense network of large and small tributaries of river Pripyat and numerous drainage channels that were created during the period of activity of the Western expedition for the drainage of wetland in the late nineteenth century. The territory of the park from the North is limited to the right bank of Pripyat, from the Northwest - its tributary river Stviga, and from the East - the river to clean.
On the territory of Pripyatsky national Park there are about 300 floodplain and ancient lakes. During the flood period, water can cover up to 70% of the protected area. Pripyat is the largest and most high-water tributary of the Dnieper. In the flood, and when the rain floods, the floodplain of the Pripyat river, the largest and most full-flowing tributary of the Dnieper river, is flooded, and the width of the spill may reach 30 km. In a period of major spills in front of the eyes of a traveler offer endless quiet of water right to the horizon. In the upstream direction of Pripyat river has many canals, and throughout the rest forms meanders, oxbow lakes and bays, there are lots of viscous sandy islands. This region is distinguished by a long spring flood and almost annual autumn rise in water level.
Pripyat river basin consists of winding, calm and overgrown rivers, a multitude of reclamation canals, artificial ponds and swamps.
Scientists believe that national park is a hydrologically closed area. On the territory of the park there are about 38 species of fish. Among them special interest is a catfish, and a quiet oxbow lakes there are perch, tench and rudd in the shallows come on spawning shoals of fish: bream, pike, sabrefish, roach.

The floodplain landscapes, which have no analogues in the world, are of exceptional value of Pripyatsky national park. Here centuries-old oak forests alternate with boggy meadows, sites of woodland and bushes, old and inundated lakes, separate dunes.
Due to the wide range of transitional and riding swamps, the swamps are called the Lungs of Europe, because it has long been known that swamps are better than forests enrich the air with oxygen.
Forests together with swamps and floodplain river complexes occupy about 95% of national park area. Unique floodplain oak forests of Polesie have been preserved here for the whole East Eurasian plain. Nearby is no less amazing beech forest trees which reach 100 years of age. In the transition zone from swamps to droughts and along the watercourses grow island spruce trees – the relics of the last ice age. In the South of the Park, typical Polesie pine forests grow on sandy bugras, ridges and dunes of the water-glacial plain, and floodplain meadows with lush grassy vegetation spread in the treeless part of the floodplain.

Flora of national park includes more than 1000 species of higher plants, 47 of which are listed in the Red Book of the Republic of Belarus. Among the rare plant species grow mountain arnica, baranets vulgaris, salvinia natans, daphne borovik, turk's cap lily, white lily, sleep-grass, common columbine, primula veris and others.

The wildlife of national park is rich and diverse, characterized by a significant number of rare species that are nowhere else in Belarus. The Park is home to more than 45 species of mammals, 7 species of reptiles, 11 species of amphibians, more than 3,300 species of invertebrates. Of the large ungulates are numerous elk, wild boar, deer, common predators - lynx, wolf, fox, ferret, weasel, marten. In the park successfully carried out the re-acclimatization of bison and american mink, raccoon dogs, muskrats. The richest and almost unparalleled communities in the region are confined to floodplain ecosystems of Pripyat river.

Pripyatsky national park is a paradise for ornithologists. The most important habitats of rare species listed in the Red book of the Republic of Belarus, protected species of Europe, including those under the global threat of extinction, are concentrated here. In general, national park is inhabited by 256 species of birds - it is 98% of the fauna of feathered Polesie and 79% of the ornithofauna of Belarus.
Numerous colonies of near-water and coastal bird species give special scientific value to national park: big and small white herons, gray and red herons, various kinds of waders, gulls, terns, ducks. Pripyat river valley is the most important migration corridor for birds flying from wintering places in Western Europe to nesting places in tundra and forest zone of European part of Russia - geese, sviyaz, turukhtan and other water birds. The park is home to 90% of birds listed in the Red book of the Republic of Belarus. Among them the black stork, common crane, european green woodpecker, azure tit, marsh owl, white-tailed eagle.

The rich natural heritage of Pripyatsky national park attracts mainly ecological tourists who are interested in the process of observation of various species of animals or birds in the wild. The location of the park on the territory of Polesie lowland, in the kingdom of floodplain meadows, oak groves and water surface, made it a favorite place for scientists, ornithologists and bird lovers. For lovers of untouched nature offers ecological tours of different lengths, including botanical and ornithological. Serious work is being done to ensure the observation of species: the identification of their habitats and concentrations of wild animals, mapping of settlements, the study of trace activities. Great interest among the guests of the park cause ecological trails and photosafari, as well as boat on Pripyat. For a full outdoor recreation organized tourist parking, located on the shore of Pripyat, where you can stop for a picnic, cook fish soup and fragrant barbecue. 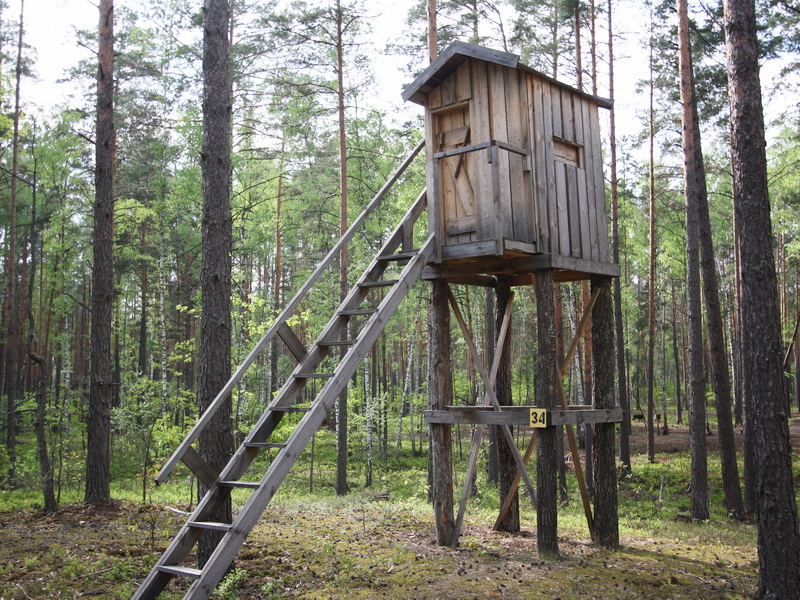 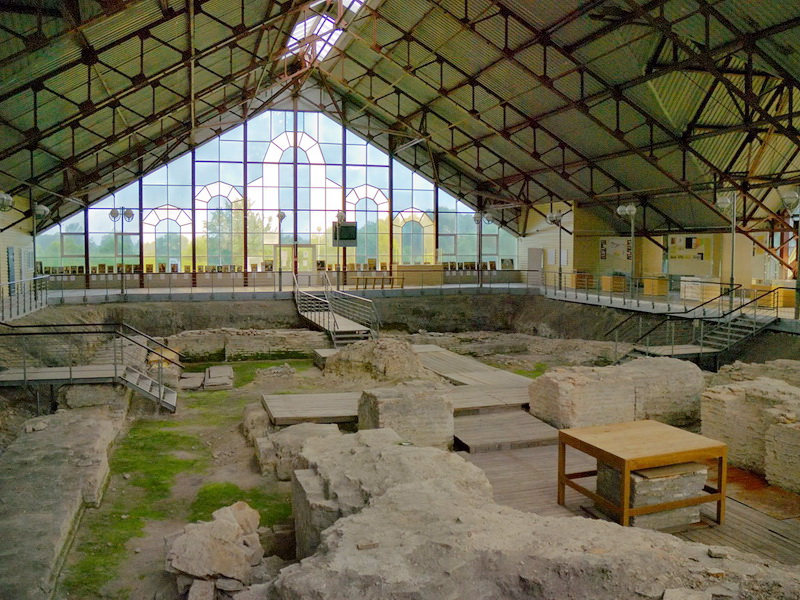 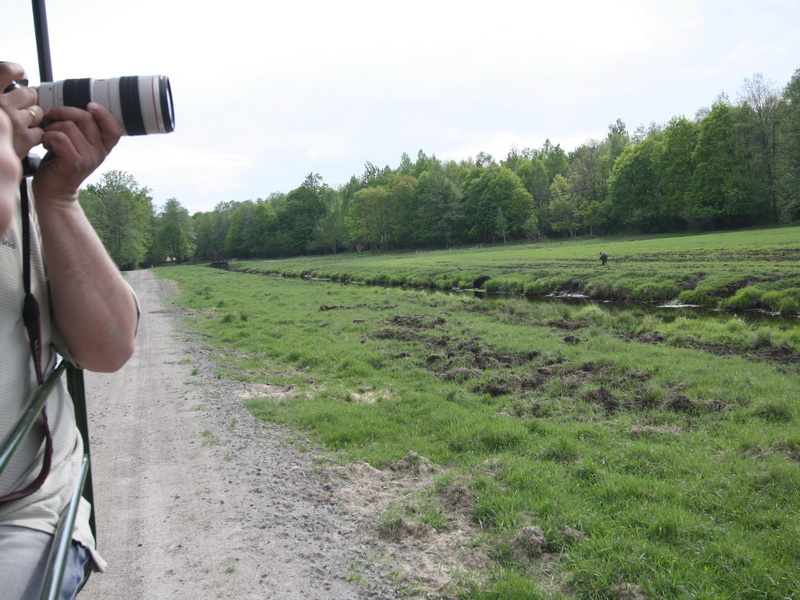 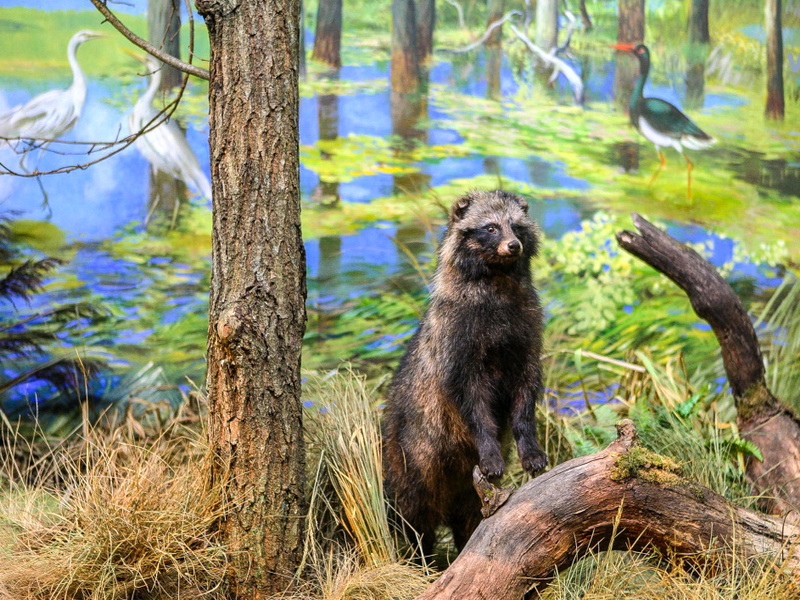 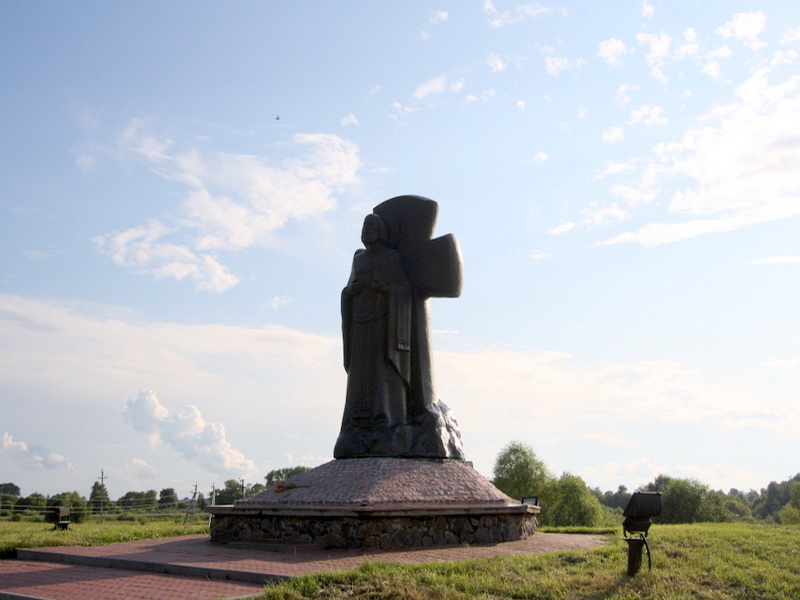 A fairly complete picture of the nature of Polesie can be formed as part of a visit to the new Museum of nature, which is located in the agricultural town of Lyaskovichi. The Museum introduces visitors to the typical Polesie landscapes and biological diversity of the park, as well as the history of Polesie life in the thematic hall of ethnography, archaeology and «home Poleshuka».

Belarusian Polesie along with untouched nature is famous for its amazing rich folk traditions and ethno-cultural identity. Turov city - the center of Ancient Turov kingdom, keeping history from the ancient settlement to the present. The city, which is often referred to as the second Jerusalem, will surprise guests with its local flavor and stone crosses, which were caught in the river and grew right out of the ground on the Borisoglebskoe cemetry.

A distinctive feature of Polesie are themselves human with their special polesie dialect, authentic songs and dances, home style and crafts. Now it is not just an object of study – it is one of the tourist brands of the region.
To preserve the traditional culture of Polesie in national park Pripyatsky festival of ethnocultural traditions «Call of Polesie», where guests can get acquainted with local craftsmen in the city of masters, enjoy the work of professional and amateur groups, take part in the fair.
You can discover the unique and wonderful world of the Belarusian Polesie on a tour Turov-Lyaskovichi.

National park Pripyatsky it was created to preserve the natural complex of Pripyat river valley as a standard of natural landscapes and storage of the genetic fund of flora and fauna of the Belarusian Polesie and its use in the process of environmental, scientific, educational, tourist, recreational and recreational activities.
For the realization of these goals within the park the following functional zones are allocated: