News : Opening of the North Tower of Golshany Castle

News and promotions about rest in Belarus: January4February4March8April4May9June3July5August4September3October2November3 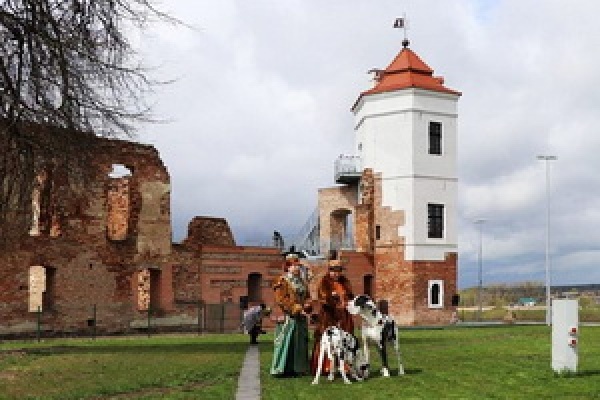 Opening of the North Tower of Golshany Castle

17-May-2021
On May 6th, 2021, the opening of the North Tower of Golshany Castle and a tourist information center attached to it took place. Now all guests will be able to visit the museum exposition, which tells not only about the history of the castle and its owners from the Sapieha family, but also breathtaking legends - after all, according to legend, ghosts White Panna and The Black Monk are still walking here.

The Golshany Castle is a monument of palace and park architecture of the first half of the 17th century, the prototype of the castle from the famous work of the classic of Belarusian literature Vladimir Korotkevich «Black Castle Olshansky». The castle was badly destroyed and for a long time visitors could only admire its ruins. But in 2015, the reconstruction of the castle began: the ruins were partially mothballed, and restoration work is underway in the northern tower and the northeastern building.
To date, the North Tower of the Golshany Castle is ready and accepts tourists, and the adjacent territory has been landscaped: a spacious parking lot, a visitor center have appeared on it, a modern system of outdoor and indoor lighting has been installed. The castle itself received new staircases and observation platforms, and a museum is located inside the tower.

The museum exposition is located on 4 floors of the tower, each of which has its own concept and museum content. In the basement, everything is covered with mysticism and legends of the Oshmyany region, in the interactive exposition there are references to the novel by Vladimir Korotkevich «The Black Castle of Olshansky», bas-reliefs White Panna and Black Monk. On the first level, finds are presented, found during archaeological research of the castle and its surroundings in different periods of study. A glass floor with special lighting reveals a placer of gold coins and other gifts of that time to the guests' eyes. The second level is a ceremonial room with a majestic fireplace, restored according to the technologies of the 17th century, furniture elements, decorative paintings, bas-reliefs of the owners, as well as probes - authentic high-density bricks with the trademarks of the ancient Sapieha family. On the third level, you can see a cross-sectional model of the castle, a panel with its images during the period of prosperity and decline, portraits of its owners. There is a special observation deck with a telescope, from where a wonderful view of the ancient Golshany and the Ashmyan panorama opens up.

The variety of the museum exposition will allow carrying out excursions of various themes, including the mystical component and the legends of the castle, using the updated costumed theatricalization with characters.

A visit to the museum exposition of the North Tower can be combined with a visit to the traditional festival «Golshany Castle-2021», which will take place at the castle walls on May 22th, 2021.