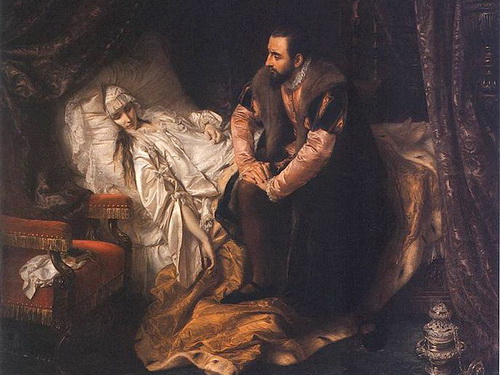 The legend of the Black Lady is one of the most beautiful and mystical legends of Nesvizh. It is based on a romantic and, at the same time, tragic history, which actually had a place to be.

Barbara Radziwill - a representative of the most influential magnate family of the Grand Duchy of Lithuania secretly married Sigismund - the future King of the Polish-Lithuanian Commonwealth. According to the rules that existed at that time, Sigismund was supposed to strengthen the state with a good marriage. The court did not know about the marriage of the young king, so the courtiers immediately began to look for a bride from noble families of Europe. The news of the king”s secret marriage broke out like a bolt from the blue. She was especially unpleasant to Sigismund”s mother — the proud Italian woman, Queen Bona Sforza. Barbara’s marriage with the king strengthened the position of the Radziwills in Poland and brought them closer to the throne. Bona Sforza passionately hated this family, considered them upstarts. For the Polish court it was better to see the Turkish Sultan on his desk, than any of the Radziwills. The Italian as best she could prevented Barbara from coroning. The Catholic clergy offered Sigismund a divorce, and a sin for the violation of the marriage vow to be divided among all the subjects of the state. But the king, passionately in love with his beautiful wife, replied that he would rather go over to Protestantism than abandon Barbara and violate the promises given to her by God.

When the Sejm still crowned Barbara, Bona Sforza acted like a real Italian. With the whole court, she moved to Italy, but left a doctor who prepared poison for Barbara. Barbara was crowned in December 1550, and six months later she was gone. She was buried in Vilna, the city of her childhood. All the way from Krakow, the inconsolable king walked past the coffin of his beloved.

So the story ends and the legend begins. Sigismund, who loved Barbara so much, did not want to be reconciled to her death. The king decided with the help of alchemists and magicians to call the soul of the deceased wife. According to the rules, during a seance, the king should not have touched Barbara”s ghost. When all the necessary ritual actions were completed, and the spirit of Barbara appeared in the room, the king could not resist, rushed to his beloved with a cry “My dear ...” and touched her. At the same time, an explosion thundered in the room, room filled with a smell of a corpse... It is said that since then the ghost of Barbara could not find peace. It is believed that the ghost after the death of the king settled in the Nesvizh Castle. As a rule, the spirit of Barbara appears in the Nesvizh Palace at night, in the first hour. According to legend, with its appearance the soul of Barabara warns of future troubles. She was seen in the Palace just before a strong fire in 2002, when most of the palace burned down.

All individual and corporate tours in Nesvizh palace Radziwill