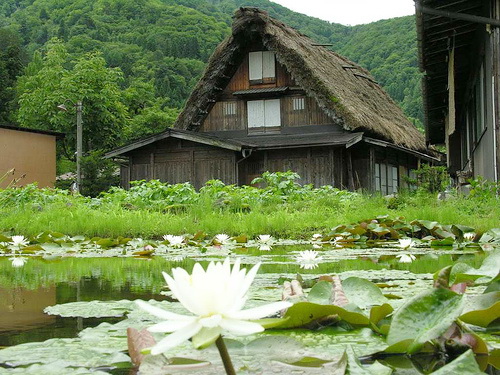 In Bogatyrevichi, that on Grodno region, there is a deep ravine with steep slopes. On the slope under the canopy of pines is mysterious grave with a wooden monument and two unpolished stones. Once upon The grave was a cross with the inscription «Yan and Cecilia. 1549 ». About Yan and Cecilia, the people have a beautiful legend.

This story happened a long time, a hundred years later, after the Lithuanian people took Christian faith. Grodno region has come two people. What were their names, who are they, nobody knew; only by their speech yes the dress could have been guess what they came from Poland. When their met and asked what their name is they answered that at holy baptism they were called Yan and Cecilia. And when they were trying to find out where and why they go, they answered: «We are looking for deserts!». It is seen it was all over what they feared chase and wanted hide from people, live only under God patronage. Origin they were unequal: Ian is tanned and very strong, which is rare happens among the lords, and in it - whether she walked, stood whether she was silent or spoke - the noble was visible. Yan and Cecilia went through the whole forest, seen many lakes and meadows, went to the fishermen, to falconers and boyars, but nowhere are they I liked it like on the bank of the Neman. Les gave im wild apples, nuts, berries, mushrooms; to the river on herds of deer and chamois came running together; at the top squirrels lived, and thousands of hares hid below and marten; in the water beavers built their houses. Lot brought the first people who settled here - and Cold and hunger suffered enough.

Six sons and six daughters were born to They grew up on the banks of this river, in the depths of this forest, under the auspices of God. One of the sons took his wife from the fishermen, the other the falconers, the third fate sent the boyars the daughter, the fourth beaver, and the fifth brought wife from Grodno. Where did sons get themselves wives, from there came grooms to woo for daughters, but did not take them far, but remained right there, they built houses for themselves, chopped wood, and sowed bread.

It”s been eighty years since the day Jan and Cecilia first entered this land. There were people who told the king himself, what miracles are happening somewhere in the Lithuanian region, in the most deaf forest, near the bank of the Neman. Reigned then King Sigismund Augustus, and he decided with his eyes to see something about that with such enthusiasm narrated folk rumor. Having passed a deaf forest, the king was amazed to find that where Before there was a wild game and hopeless wilderness, sheltered wild beasts, lay a large plain with a yellowing stubble. On stubble, like tall towers, stood ricks different breads; a hundred pairs of oxen plowed the land under winter, and on smooth fields ran tamed horses, grazing herds of red cows and white sheep. On two hills two windmills waved Thousands buzzed in their linden forests bee swarms, and in alder on all branches hung huge rookery nests. Hundred houses separated from each other by gardens, stood, stretched out along the river, and from their pipes, as if from church censes, golden smoke rose straight to the sky. There were no leaves on apples and plums it is evident - so they were covered with fruits; on green grass dried flax and whitened long tapes of canvases; in the huts knocked krosna before huts on branches and wattle dried just dyed yarn. From the best house sons and daughters, grandchildren and great-grandchildren brought Jan and Cecilia. Centenary elders walked themselves, in no one help without needing white, like snow, linen dresses like two white doves, one after the other. is he relied on the ax, mounted on a long handle; she dismissed her gray hair, ironed hand chamois. When they stopped, the king, to the amazement, took off his cap and so lowered her down. Then, raising his right hand over the people, proclaimed that this kind of marching from a person of simple origin, equated to the noble gentry and henceforth may enjoy all rights and advantages, knightly class owned and granted to him by a nobleman dignity and name of Bogatyrovichi with a coat of arms bison on a yellow background. It happened in 1549 year...

All individual and corporate tours in Grodno