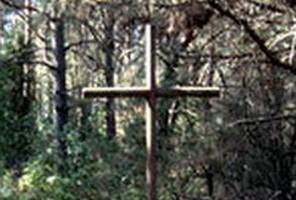 Legend "Legend of the Knyazhayа hill"

According to local legend, the tract is the tomb of Princess Olga (not Kiev):

«That was long ago. Princess Olga was held here. She was ours, Russian ... Once killed her husband, Vladimir, Olga, and went to war with the enemy... Olga won cunning enemies, forge horseshoes on the horses hooves on the contrary. But for Dyvin was fast, and from there the soldiers caught up with her. While our mountain above the marshes stood forest it was not. There the princess and stopped. At the time, the enemy troops advancing from the south, from Novoselki. On the mountain and found Olga death ... There she was buried. The tomb was almost at the top. Since then, the mountain and the mountain is called Knyazhaya or princess. Has long stood at the grave of a simple wooden cross, but I guess it was taken down by the Bolsheviks ... »

December 10, 1288 Vladimir Vasylkovych died. Olga Romanova at the funeral of her husband was with her sister and Izyaslav husband nun Helen. Last time in Ipatiev Chronicle Olga mentioned in March 1289 years.