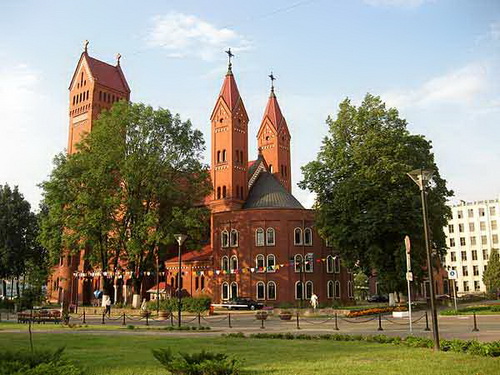 Legend "Church of Simeon and Helena"

The Red Church on Independence Square is not only an architectural monument, but also a monument to Simeon and Elena is the dead children of Edward Voinilovich and Olympia Uzlovskaya. The Voynilovich family is one of the oldest noble families of Belarus. Edward Voinilovich is the largest landowner of Slutsk land, a prominent public and political figure, the last descendant of the famous family. Fate dealt a terrible blow to Edward and his wife, their son Simeon died early, and a few years before his nineteenth birthday, her daughter Elena died. The inconsolable parents donated a part of their fortune to erect a church in Minsk in memory of the children.

Legend has it that already seriously ill Elena, a few days before her death, saw in a dream an angel who showed her a temple of unprecedented beauty. In the morning, when she woke up, she painted what she saw in her dream and asked her father to build in her memory exactly the same church. Voinilovich turned to the City Duma with a proposal to build a church at his own expense, but with two conditions: the church will be built according to the project provided to them and will be consecrated in honor of Saints Simeon and Helen. The city authorities gave the go-ahead. On November 21, 1910, the church, built of red brick in the New Romanesque style, was solemnly consecrated. 2 small towers symbolized the memory of early departed children, the big - inconsolable parental grief.